Get Out Movie Review An African-American photographer goes to see the parents of his Caucasian girlfriend. Chris Washington sets out to visit Rose’s parents after her insistence. They planned to spend the weekend at the parents’ house in the country estate. On their way, their car hits a deer, and they purpose to make it known to the authorities. The officer who was investigating the case seemed biased. He asked for the ID of Chris although Rose was the one driving when the incident occurred. The officer only backed off after Rose protested vehemently. The officer over-rides the incident as claims it is a minor mishap on the road. Their arrival at the Armitage estate is marked by the presence of an African-American housekeeper and groundskeeper. Chris is bothered by this, but the reassurance from Rose calms him down. Rose’s parents welcome Chris warmly. Dean, Rose’s father is a neurosurgeon while Missy, Rose’s mother, is a hypnotherapist. Dean makes mild racist comments during the tour of the estate. Dean is however sensitive enough to smoothen things up quickly. Dinner time was not easy for Chris, too, since Jeremy, Rose’s younger brother, kept making unpleasant remarks about African-Americans. Further, Jeremy wished to use Chris to make demonstrations of jiu-jitsu moves. The tension was brought under control by Missy. Interactions between Chris and the African-American workers at the Armitage are characterized by strange behavior. During the first night, Missy manages to take Chris to the ‘sunken place’ where she can break Chris’ smoking habit. Wealthy Caucasian guests streaming into the Armitage do not make it better for Chris. Their interest in Chris is peculiar, and this makes him uncomfortable. He tries to break out from the crowd, and he bumps into Jim Hudson, an artist who had stolen the admiration of Chris. Despite being blind, Jim is particularly interested in the photography work of Chris.

It becomes too uncomfortable for Chris, especially after the unfriendly interaction with Logan. He manages to convince Rose, and as they plan to leave, the guests at Armitage hold an auction with Chris as the price. Jim emerges as the winner and Dean is tasked with preparing his price. Meanwhile, Chris had managed to send a photo he took of Logan to Rod, his friend. Rod can recognize him and informs Chris that Logan King is not his real identity. Andre Hayworth, now disguised as Logan King, was reported missing about a six months ago. But the police ridicule Rod instead of offering help. 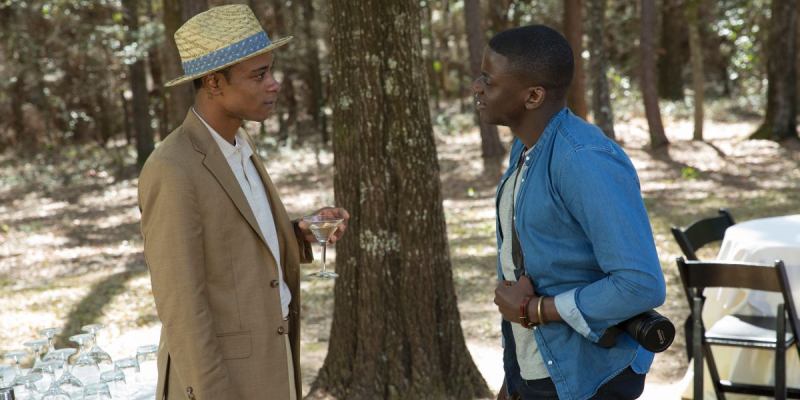 Chris realizes what mess he was in when he stumbled on a small box that contained Rose’s photos posing with black people. This was a collection of previous acquisitions by Rose. He plans to escape, but the guests at Armitage prevent him. Rose comes clean and informs him of her plan and how she used the intimacy, romance, and concern to lure him. To render him cataleptic, Missy uses a hypnotic word. Upon waking up, Chris finds himself strapped in a game room in the basement. The leather chair he sat on was in front of a television that played a video of Roman, Rose’s grandfather. Roman spells out the bitter truth behind the abductions. Young, strong, and healthy African-Americans are abducted so that they can serve as hosts to the wealthy Caucasians. This is made possible through hypnotic and neurosurgery conditioning. The consciousness of the host remains deep in the ‘sunken place’ and this makes them participate helplessly. They are trapped within themselves. Jim is also brought on screen, and he explains why he placed the high bid on him. Jim was interested in acquiring a new set of eyes as well as the unique abilities Chris had as an artist.
Chris manages to block himself from the hypnotic suggestions by stuffing his ears with the chair fillings. He succeeds in killing Dean, who had come to prepare him for surgery. He also manages to immobilize Rose and left her for the dead as he took off with Rod, his friend.